Students will gain an insight in a variety of areas including trade, monetary systems and the interplay between politics and economics.

The study of Economics provides insights into decision-making, market outcomes and the functioning of the overall economy. Political Science is concerned with the structure and function of both domestic and international political systems, and engaging questions associated with American politics, international politics, public policy and political theory. The combined Economics / Political Science major provides students with rigorous preparation in both economic theory and applications, and political processes at the national and international levels. By combining coursework in Economics and Political Science, students gain an interdisciplinary perspective important to understanding both political and economic issues. Students are trained in research methods used in Economics and Political Science, giving them interdisciplinary tools for problem solving and policy making. Students in this program will gain insight into a variety of areas including trade, monetary systems, development, and the interplay between politics and economics within the U.S. and the international system.

The combination of economics and political science is extremely beneficial to students who aspire to to work in government or legal positions. Many students majoring in economics/political science go on to law school, graduate school and into the professions.

For more information please see a video made by the American Economics Association: "A Career in Economics...it's Much More Than You Think"

For a complete Program of Study see the university catalog. 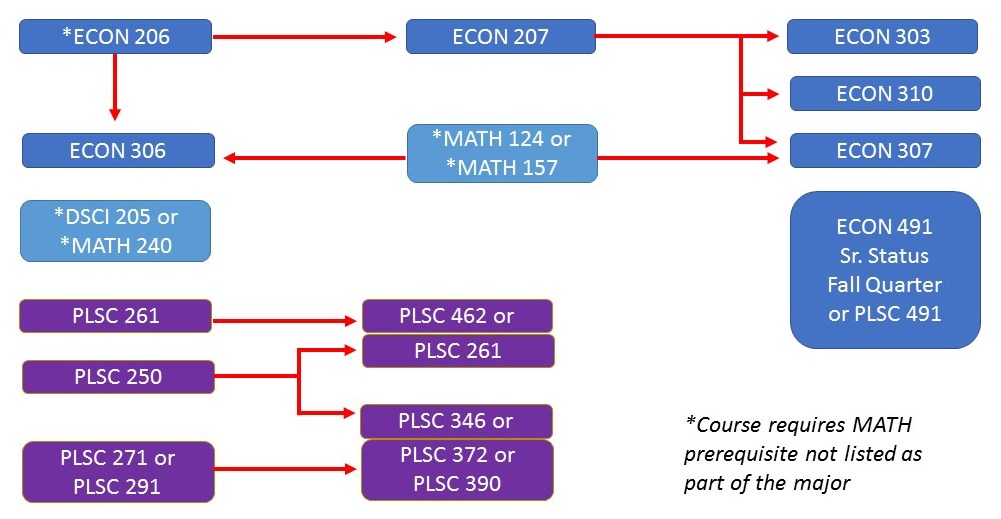 Please download and read carefully the 2021-22 ECON-PLSC Plan of Study. This includes a flowchart for the required courses and will also serve as your planned course schedule when submitting your paperwork for your senior evaluation for graduation.

For help with planning your courses, please see your advisor or the department office.

* The sequence of classes which must be taken to earn your degree within four years.  A class on the critical path cannot be started until you've taken the previous class.  If these classes are delayed, it is more difficult to graduate on time.

The required courses build a strong foundation of economic and political science theory. One course with a Communication Focus (CF) as well as a minimum of three Writing Proficiency (WP-3) points are required. The CF course must be taken within CBE, while the WP requirement can be met with courses from any of the combined major departments. These requirements can be met as part of required or elective courses.

Students often complete courses that are equivalent to Math 124, Math 157 and DSCI 205. If you believe that you have completed an equivalent course and it has not transferred as equivalent, see the instructions for an equivalency evaluation.

Several of your prerequisite and required courses also count as GURs. Look for classes that are labeled as "GUR." By planning your schedule properly you can reduce the total number of classes needed.

As an economics and political science combined major you are have the freedom to complete a further number credits of courses with departmental advisement. In your electives you may choose your course schedule within the following requirements: