Equilibrium in the Bottleneck Model with Large and Small Users

In most of the literature on traffic congestion it is assumed that users are “small” in the sense that each one controls a negligible fraction of total traffic. However, large users are often prevalent. These include major interurban freight shippers, urban goods delivery companies, and postal services. Furthermore, major employers such as government departments and large corporations can add substantially to traffic on certain roads at peak times. Large users have an incentive to internalize the congestion delays their own vehicles impose on each other, and it is natural to consider how this affects their travel-related decisions.

Using the Bottleneck Model, Silva et al. (2016)* have recently shown that a pure strategy Nash equilibrium (PSNE) in departure times may not exist. Silva et al. (2016) restrict attention to two large users controlling identical vehicles with linear trip-timing preferences. In this paper we extend consideration to settings with both large and small users and more general preferences. We show that PSNE can be restored when the model is generalized in any one of three ways: (1) when vehicles differ in their preferred arrival times, (2) when large users are constrained in the rate at which their vehicle fleets can depart, and (3) when large users have altruistic preferences (i.e., they attach some weight to the trip costs of other users). We also show that self-internalization of congestion can make a large user worse off, other users worse off, and users in aggregate worse off. Thus, paradoxically, self-internalization can be counterproductive.

* Silva, H., R. Lindsey, A. de Palma and V. van den Berg (2016), On the existence and uniqueness of equilibrium in the Bottleneck Model with atomic users, Transportation Science, Published online in Articles in Advance on August 11, 2016.

Inventory Stocking and Rationing for an Omni-Channel Retailer 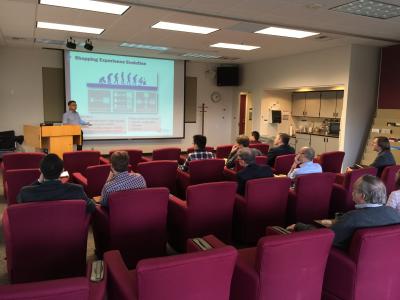 In this paper, we study the inventory and fulfillment strategies of an omni-channel retailer that would like to leverage its fully established offline retail store infrastructure to help the online channel. We consider a single-item, newsvendor setting where online and offline channels offer the same product at different prices to independent, non-overlapping Poisson demand. The offline store can fill online demand at an additional cost k, if online channel runs out of inventory, or doesn't hold its own inventory, but not vice versa. The retailer makes several decisions on different time scales: before the season starts it must decide where to keep inventory and how much to stock. During the season as demand unfolds and inventory decreases, it can also make real-time rationing decisions for the offline inventory. We identify the additional cost k and demand mix between the two channels are critical factors in determining the retailer's inventory stocking decisions. Then we show that a time-dependent threshold rationing policy is optimal for the retailer's offline inventory. Effective heuristics are developed and evaluated. We find that the real-time rationing strategy not only helps the retailer to improve profit, it can also help the retailer to alleviate the impact of wrong inventory stocking decision.

Yong-Pin Zhou received his M.S. and Ph.D. in Managerial Science and Applied Economics from the Wharton School at University of Pennsylvania, and his M.S. in Mathematics from Johns Hopkins University. He has been an associate professor of Operations Management at the University of Washington, Seattle since 2007; currently he is also a Professor at the University of Hong Kong Business School. 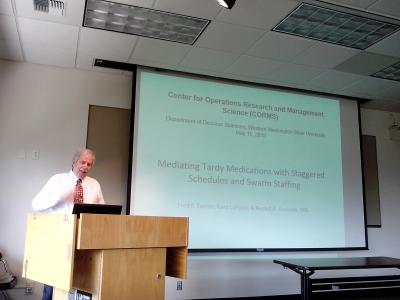 Each year over 800,000 adults with chronic obstructive pulmonary disease (COPD) are admitted to U.S. hospitals. Because low oxygen affects most organ systems, they could be treated for any of several different illnesses. However, that treatment typically involves inhaled medications administered three or four times per day according to a common, hospital-wide medication schedule. Administered by a respiratory care practitioner (RCP) assigned to the unit where the patient is located, each treatment takes about 20 minutes. Unfortunately, lengthy administration times and common medication schedules interact to create significant workload peaks for RCPs, causing a large fraction of the scheduled medications to be administered late. This contributes to lengthier hospital stays and other undesirable outcomes. RCP workload peaks can be attenuated by assigning different scheduled medication times to each care unit. However, this strategy does little to improve on-time performance if individual RCPs only treat the patients in one or two care units. We propose un-tethering RCPs from their traditional unit assignments, allowing them to move together as a team from care unit to care unit administering inhaled medications. Combined with staggered medication schedules, this swarm strategy can dramatically reduce late medication errors. Perhaps more importantly, swarm staffing enables a primary care relationship between RCPs and their chronic patients; a key element of an effective chronic care model. This research characterizes the late medication problem, presents stochastic models to select and assess alternative staggered medication schedules, and reports the experience of one hospital that adopted this strategy.

Fred F. Easton earned his Ph.D. in Operations Management from the University of Washington in 1985 and currently heads the Robert H. Brethen Operations Management Institute at Syracuse University. His research focuses on capacity and demand management issues in both service and manufacturing organizations and is often oriented toward issues found in the health services, auto manufacturing, emergency services, and light manufacturing industries. Prior to embarking on an academic career, Professor Easton was an executive with an energy utility.