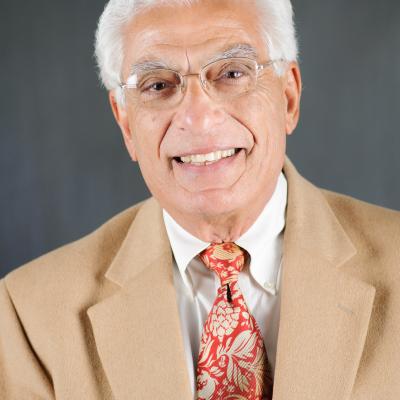 Moheb A. Ghali is professor of economics. He received his Ph.D. from the University of Washington. His fields of interest include econometrics, economic theory, and production economics.

Professor Ghali has published 3 books and over 50 papers in journals such as The American Economic Review, Econometrica, Review of Economics and Statistics, The Quarterly Journal of Economics, Economic Development and Cultural Change, and the International Journal of Production Economics. His research in other fields was published in journals in the fields of Regional Science, Sociology, Criminal Justice and Higher Education.

As a Senior Fulbright Scholar he taught econometrics at the University of Gothenburg, Sweden, and at Cairo University, Egypt. He served as President of the International Society for Inventory Research, and the Western Association of Graduate Schools, as a member of the Board of Directors of The Council of Graduate Schools and its Executive Committee, The Graduate Record Examination Board and its Executive Committee, and as President of the Board of Trustees of St. Paul's Academy.

Professor Ghali came to Western in 1993 from the University of Hawaii where he served for the previous ten years as University Director of Research. As Professor of Economics in Hawaii, Ghali won the Board of Regents Distinguished Merit Award and the Economics Excellence in Graduate Teaching Award.